What will become of the All Hallows College Dublin site?

The college, which is not in receipt of state grants, has been operating at an increasing deficit over many years, and although in recent times it has embarked on a stringent programme of sustainability – including increasing its activities and embarking on an extensive fund-raising programme –  the challenging landscape of today’s third level education arena has led to a diminishing of the college’s reserves to an unsustainable level.

In addition, the option of growing enrolment figures has been constrained by the cap on the numbers of undergraduates eligible for the free fees scheme. The wind down of the college will begin immediately and will be conducted in a phased and orderly fashion."

I have walked our dog past, driven past and gone past on my bike numerous times over the last thirty years on visits to Dublin. I remember one summer on a visit to Dublin actually going into grounds for a summer fete. It is indeed very sad to read about the news of the closure in last week's Irish Times  and the Jackie Kennedy letters, that had they been auctioned would not have raised sufficient funds to keep the college going.

Former Taoiseach Bertie Ahern had very close ties with the college with his parents living close by in Church Avenue and he talked about it a great deal in "Bertie Ahern The Autobiography" as his father worked there.

So what could be the future of this site? Many of the similar estates in the area have been knocked down and sold off for house development, others have been converted into apartments and had house and apartment developments established within the boundary walls.

Could the future be a luxury hotel development and golf course?. It is in an ideal setting, in North Dublin, close to the airport, M1 and M50. Somewhere along the line the history of the College must be preserved. Tearing down those fine old buildings and replacing them with a housing development won't do that, the buildings themselves need to remain.

Maybe the space could be used by another Dublin University or College, but despite the recovery in the country is this the wrong time to embark in such a project. No doubt there will be much debate on what is to become of the site once it finally closes. It will certainly be interesting to see what happens to that landmark set back from the road on Grace Park Road.

Posted by Philip Suter at 07:18 No comments:

With half term holidays just a matter of days away, the European Consumer Centre Ireland has issued a press release and warning last Friday - 16th May.

They say that as we go into the busy holiday season, many consumers will be considering hiring a car on holiday. ECC Ireland is therefore encouraging consumers to be vigilant when seeking to hire a car this summer.

Renting a vehicle is a convenient way of getting around during a trip and enables travellers to plan their holiday a little more freely, without having to work around public transport timetables.
However, it can also be a confusing area for consumers. What is included in the initial quote may not always be clear, and there may be additional charges for extras such as child seats or insurance.
Car rental is a frequent area of complaint in ECC Ireland's case handling. The majority of such complaints relate to supplementary charges imposed by the car rental company. ECC is therefore encouraging consumers to be vigilant when seeking to hire a car this summer.

There is no specific EU legislation in place that covers this area, but consumers can avail of more general protections set out in directives on unfair commercial practices and unfair terms in consumer contracts.

Consumers are advised to –
Consumers can contact ECC Ireland for further advice if they encounter a problem. Please contact Grace Duffy on (01) 8797 641 or at gduffy@eccireland.ie Source ECC Ireland

At the insurance4carrrental excess waiver insurance site and  Car Hire Excess Insurance Blog site we have been stating this information for years now. Naturally people do not always remember such check lists and of course there are numerous people out there who have never hired a car before.

Do take a lot of care and also remember the cheapest car hire company could end up costing you a lot more than you bargained for.

At the Irish Property Insurance Plus site, we are also reminding consumers to take adequate travel insurance. Visit the specialist page at http://www.irishpropertyinsurance.com/Irish_Travel_insurance.htm
Posted by Philip Suter at 03:51 No comments: 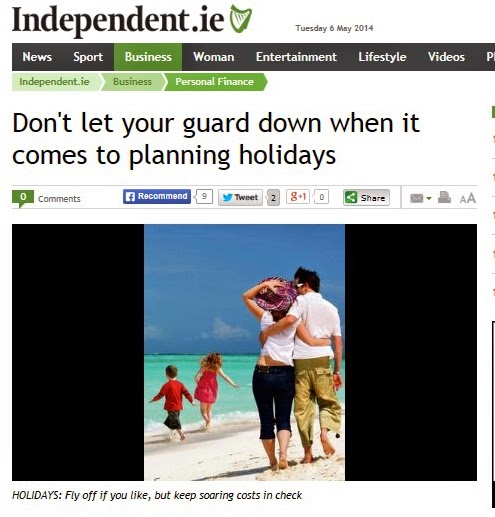 Featuring information on where to park your car at Dublin Airport, it also covered the Car hire excess insurance waiver and Travel insurance subjects. No insurance companies were suggested however.

With Car hire excess insurance Sinead Ryan the article's writer said "Car hire is a great way to get around, but fraught with added expense. If the car is damaged in an accident, you could have to cover the first €1,350 of damage before the car hire company's insurance kicks in – even if you're not at fault for the damage. All car hire companies will insist on credit card bookings to recover this money if they need to"

For Travel insurance - she commented "Travel insurance is a necessary evil, but never go without it. If you have private health insurance, you are covered while abroad, but only for hospitalisation. It won't cover lost bags, delayed flights or dodgy accommodation" See all the article here

Well if you are looking for an Irish  company that can provide Travel Insurance and Car Hire Excess Insurance take a look at what Blue Insurances has to offer. Find out more here  By the way they also offer Pet Insurance, Wedding insurance, Gadget insurance and Breakdown insurance as well.
Posted by Philip Suter at 08:18 No comments:

The IPOA - Irish Property Owners Association has today written to members urging them to write to their local TD and Senator. In an email from

Stephen Faughnan the Chairman of the association said " The treatment by the banks of people in debt is needlessly harsh and unfair.  The banks lent money without due diligence, stress testing and people borrowed in good faith.

People in debt need fair treatment and Government action is not preventing lenders from taking advantage of people in vulnerable situations, and not ensuring fair treatment.
Attached is a letter which we would like you to circulate to your national public representatives and any others you may happen to know, ideally in the post and addressed personally to your public representative (both TDs and Senators).  They are the only people who can put the necessary pressure on to reign in the banks.  Now is the perfect time with the Local and European Elections coming up on May 23, along with By-Elections in two constituencies.


We need to support members and people in trouble with the banks.   As a society, we need to stand together on this issue and support our friends, family and neighbours in financial difficulty.  The banks were bailed out by the citizens of this country, but citizens in financial difficulty are being harassed, bullied and not treated fairly.  There needs to be an independent Dispute Resolution Service to ensure fair treatment for both lenders and people in serious debt, without the power of veto given to the lenders by the Government.


Would you please personally support this campaign for fair treatment, and pass on the sample letter and details to all the people on your email address list asking them to help the campaign.  Our country will only begin to prosper when the level of lending debt is dealt with in a humane and fair way. "
If you are a member of the IPOA and have not received this communication suggest you contact them at mailto:info@ipoa.ie
In yesterday's Irish Times there was an article by Connor Pope "BOI criticised for 'very blunt' approach to distressed borrowers - Insolvency Service singles out Bank of Ireland for criticism"

Posted by Philip Suter at 08:53 No comments: