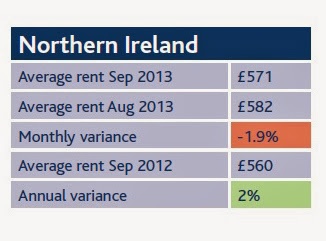 Although the average rent in Northern Ireland fell from £582 in August to £571 it is still £11 better than it was a year ago.

According to our local HomeLet business manager " The latest HomeLet Rental Index shows there was a 1.4% increase of students referenced throughout the month, with those in Northern Ireland currently making up 23.8% of the region’s whole tenant population. Across the rest of the UK, average rents increased once more to £854 per month"

If you are looking for Landlord or Tenant Insurance visit the HomeLet site here .

The 2014 Budget was held last Tuesday (15th October). According to The Irish Times report regarding property - €30 million to be allocated to the State’s house building programme which will deliver 500 houses, including new builds and the upgrade of previously uninhabitable units.

They will be seeking public money to fund “stable homes” for families who are long-term homeless.

Further €10 million to be allocated for unfinished estates.

€10m will be allocated to resolve problems at Priory Hall apartment development  in Donaghmede, Dublin.- It was built in 2007, however according to "The Journal.ie" A flooded car park was the start. Residents stopped parking their vehicles in the underground area in 2007 when, one morning, they discovered their cars floating out of the space. Dampness in the homes was also becoming problematic and there was shoddy workmanship on display in every corner.

The entire complex is a fire hazard. A really, really dangerous one. Back in October 2011 when the residents were evacuated, Justice Nicholas Kearns asked that a fire engine remain at the development in case a blaze took hold as the residents moved out. The homeowners, however, had been living in the same properties for years at that stage. Tom McFeely the builder cannot afford to fix the problems. Read More Here

The IPOA (Irish Property Owners Association) said “Government has missed a golden opportunity to reinstate the much needed flat in the private rental sector, by not including the pre 63 type property in their scheme for renovation of houses.  Inclusion of these type of properties would generate work, bring up, the standards, energy efficiency and bring back much needed accommodation in the private rental market, where tenants are currently experiencing huge shortages of affordable homes.“ Stephen Faughnan, Chairman of the Irish Property Owners Association

Irishlandlord.com have summarised "So how will budget 2014 effect you?"

NO CHANGES IN INCOME TAX, USC AND VAT RATES

NO INCREASE IN EXCISE DUTY ON FUEL

Minister Noonan said "I am introducing a home renovation tax incentive scheme. The Home Renovation Incentive will provide an income tax credit to homeowners who carry out renovation and improvement works on their principal private residences in 2014 and 2015.


"The incentive is payable over the two years following the year in which the work is carried out. The credit will be calculated at a rate of 13.5% on all qualifying expenditure over €5,000 up to a maximum of €30,000."

On the issues of mortgage arrears, Mr Noonan said:“Within the next twelve months I expect that the vast majority of customers who are currently in (mortgage) arrears will have been offered and accepted a sustainable solution.”

Extension of the property regeneration programme, which previously applied only to Limerick and Waterford, to Cork, Galway, Kilkenny and Dublin.

There was no special VAT rate for the construction sector which several industry groups had been lobbying for.

Investment in social housing to re-commence

"This level of investment could be increased depending on the pace of economic recovery.
The investment will include the construction of 4,500 new houses and apartments in Dublin, in addition to much-needed office accommodation in the city centre and investment in commercially viable retail projects."

jml Insurance are pleased to announce that they have a great choice of holiday home insurance companies advertising for the Overseas and and Irish markets.

More and more consumers are turning to insurance policies written in their own language and this applies if they own a property in a country like or actually live there permanently.

There is a huge market for holiday homes in different parts of the world and a company like Intasure Insurance offers holiday home cover in the major European countries and in addition countries like and the UAE.

Andrew Copeland Insurance was founded in 1977 and they insure domestic property in , , , , , The Republic of Ireland, , Belguim, The Netherlands, , , , and

Rentguard Insurance offers a choice of commercial insurance in the together with Landlord
And Tenant insurance products.

Staysure Insurance have become specialists for the “over 50’s” and offer a range of products including Travel insurance, Health and Life insurance, Home insurance and Car insurance products.

Philip Suter of jml Property Services said ”jml-insurance is not a comparison site operation. The insurance companies advertise their products on our sites and there are too many companies that will confuse the customer.”

More information at
http://www.irishpropertyinsurance.com/Irish_Holiday_Home_insurance.htm
Posted by Philip Suter at 04:46 No comments:

How to deal with mortgage debt event

Have just received a notification from Irishlandlord.com which looks interesting if you are an investment property owner.


How to deal with mortgage debt
Do you have mortgage on your home or on an investment property?

Are you burdened with mortgage debt? In negative equity? or is your interest only period coming to an end?
Mortgage debt is now the number one source of anxiety for most property owners.

With the collapse in the property market many property investors are experiencing reduced rental income, negative equity, increasing interest rates and in many cases increasingly aggressive lenders.

So what should you do? How do you got about engaging with lenders in a way that achieves real results. How do you achieve mutually acceptable solutions that your lenders will agree to?

Our evening seminar on Monday 11th November 2013 will deal with this topic:

Our expert speakers will include:

A former senior banker, with 30 years' experience who now helps clients to reach agreements with lenders that provide a long-term solution and allow them to get on with their lives.

An accountant and property tax expert


This evening seminar will take place in the Louis Fitzgerald Hotel on the Naas Road, Dublin on Monday 11th November at 7pm

Early bird tickets are €20 each or two for €30 - PLACES ARE LIMITED so book today Here!

Posted by Philip Suter at 07:32 No comments: 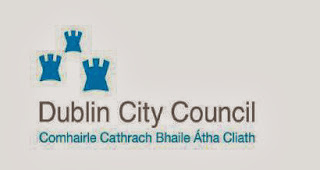 Just been notified by the Irish Property Owners’ Association that  Dublin City Council has an immediate requirement for suitable properties to meet emergency need for families and individuals who require temporary accommodation.

They go on to say "We are seeking properties comprising multiple units which can
accommodate between 15-40 persons, contain en suite bathrooms or shared facilities (may include kitchen facilities).

These buildings may have in the past been used for;

All properties must comply with environmental health standards and fire  safety regulations. Lease or service agreement options will be open for consideration and negotiation with the property owner.